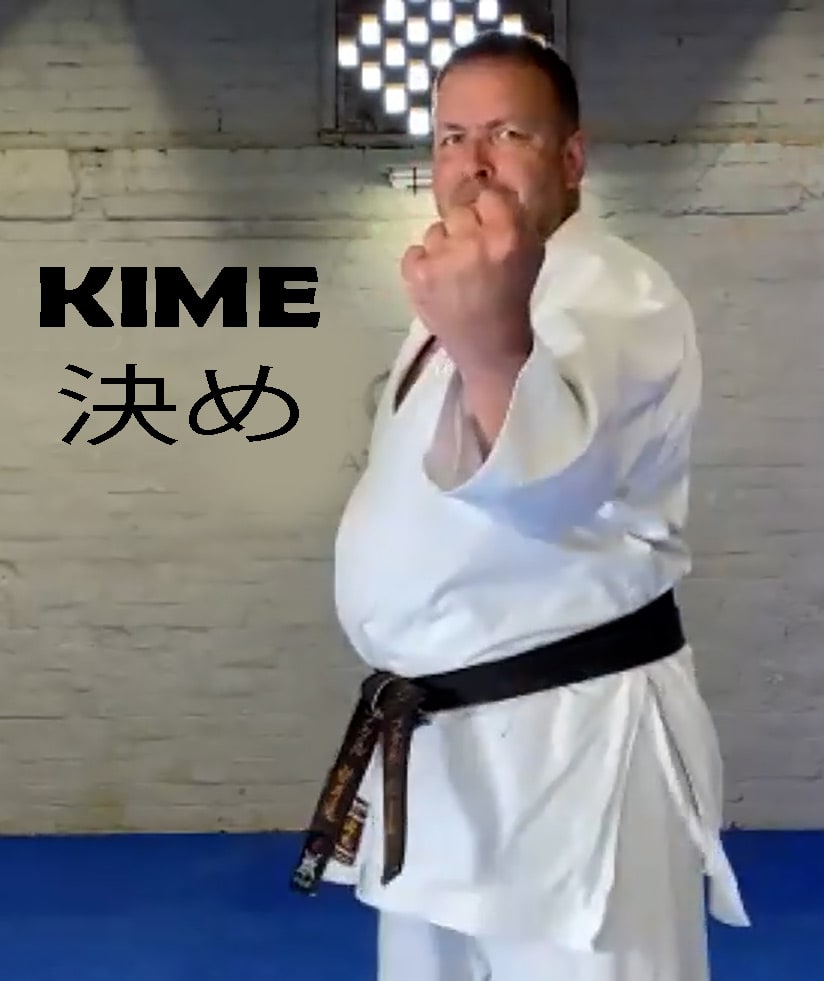 In this short 15 minute karate kime training class, we work not only on kime, but on a fast arm rotation at completion of the blocks, which actually helps with the kime.

Kime is the noun form of the verb kimeru, which means to finish or to decide, in Shotokan we refer to it as the final finishing point, or decisive point of a karate technique.

A basic explanantion of kime as my Sensei used to explain to me, is relax, tense, relax.

Just as a boxer hits a heavy punch bag and their muscles tighten on impact, we are trying to get the same muscle reaction when we deliver a technique, irrespective of whether we hit something or not!

To many karateka, kime is not just a tightening of the muscles on completion of a given karate technique, good kime must also have intent behind the technique. When practicing karate at speed, the attitude of ikken hissatsu (to finish with one blow) is essential.

Many karate practicioners practice karate at speed and have no intention behind their techniques, I always refer back to Master Gichin Funakoshi‘s quote ‘Spirt First, Technique Second’ as I believe when Master Funakoshi is talking about spirit, he also means intent.

What I am going to say next many karateka will not agree with, some will say it goes against everything Master Funakoshi stood for, but before i say the unsayable, I totally agree with Master Funakoshi’s 20 precepts (Niju Kun).

So kime to me, is focusing on destroying the target with every nerve, fibre and molecule of your being and the tensing of the muscles is a part of that.

I really studied the legendary boxer Mike Tyson when he was at his peak, I looked at him and thought to myself, there are many incredible boxers, there are probably even some who trained harder than Iron Mike, so why was he DESTROYING them ALL SO EASILY?

The art of karate, I believe is all about being a better person and following the way of karate (karatedo).

Master Gichin Funakoshi’s Twenty Precepts of Karate (Niju kun), are there as a guide for all karateka to follow and adhere to.

I also believe in karate for health and well being, but Shotokan karateka must grasp the concept of Ikken Hissatsu, combine this with kime and your karate will take on a whole new level.

Ok, rant over, back to the fifteen minute karate kime training follow along class.

To start with, we focus on just the arm rotation at the end of the four basic blocks, age uke (upper block), soto uke (outside block), uchi uke (inside block) and gedan barai (downward block).

Focusing on a sharp forearm rotation, then adding kime and holding for 2 seconds.

In the second part of the class, we then practice correct kime, so a sharp forearm rotation and muscle tension for a split second, before relaxing.

Boxers have great kime! They are continually hitting things and each other, but karateka spend a lot of time on kata and kihon, where there is no impact with an object. So karateka have to artifically add kime which boxers do naturally. But when I say artificially add kime, with karate practice, along with makiwara and focus pads, kime then becomes natural.

We hope you enjoy this follow along karate kime training class and if you are not yet part of our Shotokan Karate Community, please check it out, I look forward to seeing you in the Dojo real soon. Oss!