Ask a boxer, thai boxer or mixed
martial artist if they hit with intent!
They will give you a bemused look
Because if the do not strike with intent,
it's all over!

Originally, karate was ALL about fighting and self defense. 200 years ago the world was a very different place, peoples lives would be in danger on a regular basis.

Learning to defend oneself and family was a priority and in some parts of the world, unfortunately, this is still the case.

But in many parts of the world, karatedo has new meanings.

When I was young, fighting was very important to me, even though I lived in a safe environment.

As I get older, my thoughts on karate have changed.

I always ask new karateka at our dojo, why they want to learn karate, most people give very similar answers.

Which are self defense and fitness and these are the answers that I expect them to say.

I then try and explain to them that karate is much more than just fitness and self defense.

After a short period of attending our karate classes, I soon discover if their character makeup will be suited to karatedo.

For someone who just wants self defense, mixed martial arts (MMA) clubs are the best, for someone who wants fitness, aerobics classes are great.

But if someone likes the karate kata (forms), fitness, self defense and the amazing history and philosophy that goes with traditional karate, then we have a match!

Self defense is a state of mind, it is much more than just fighting techniques.

You can show someone every known self defense technique, but if they cannot ‘switch on’, they will NEVER be able to defend themselves.

At the same time, you can show someone who CAN ‘switch on’, very few self defense techniques and they will be a force to be reckoned with. 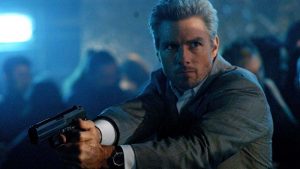 You need to have the same attitude a wild animal has as it’s about to kill it’s prey.

A lion attacking an antelope has complete control of it’s emotions.

But at the same time, it has relentless determination to get the job done, because for the lion, it’s either kill or starve!!!!!

With lots of karateka (someone who practices karate), this ability to ‘switch on’ and ‘switch off’ is not present.

If karateka sometimes practiced their karate as if their life depended on it, their self defense skills would improve dramatically. I am not saying practice like this all the time, as I believe your karate practice should be enjoyable, but sometimes you must unleash the beast 🙂

I recently watched a film with the actor Tom Cruise, in the film he played a professional hit man called Vincent (pic).

In one part of the movie it epitomised the attitude you must have in self defense.

He was tasked with the elimination of a Chinese mobster and this had Tom Cruise visiting a night club.

The next part of the film reminded me of wild animal stalking and killing it’s prey!

Vincent was in complete control of his emotions and at the same time, like a wild animal, he showed relentless determination to get the job done, only in this instant, the reason wasn’t food, it was money!!!!!!! 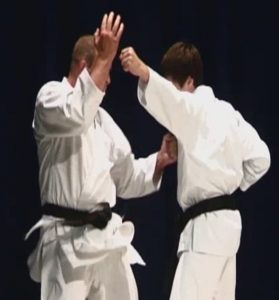 Now this might sound a little nasty and most people find this very hard, but your kicks, punches and strikes, must WANT to destroy the target.

To get powerful REAL strikes, there is nothing better than fighting another person in a full contact fight with no rules, but there are also exercises you can do that will stengthen your techniques and add VENOM. 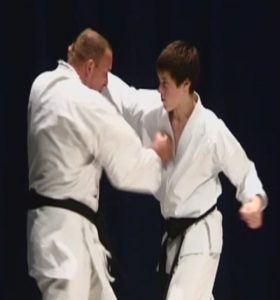 A full contact fighter will apply this ‘intent to do harm‘ with just about, every kick, punch and strike they make.

They simply want to destroy whatever they hit!

To start with use a bit of imagination, when you are hitting a punch bag, focus pads, or kick shields.

Try different training techniques, imagine the object you strike is your worst enemy.

Imagine your family is in danger, whatever you do, you must not only destroy the punch bag, focus pads, or kick shields, you must also try and destroy whatever is holding them!